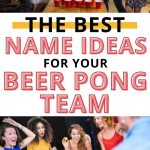 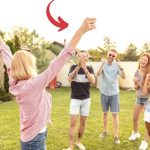 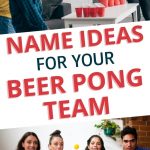 Beer pong is one of those games that you can set up anywhere and someone will always have a good time. Easy enough for drunken players, but you still need some skill. Enough that people even play it competitively! If that sounds like you, here’s some of the best beer pong team names for your next party or competition.

I don’t even drink beer… But I LOVE playing beer pong. I actually have an old ping pong table that’s long since lost its net that’s perfect for beer pong. Nothing brings life to a party quite like this classic drinking game.

That doesn’t mean it’s not a real sport, though. You can team up and play against your friends at a party, or join a local beer pong competition. They’re frequently held at bars but more and more venues are starting to host beer pong tournaments – sometimes even without alcohol!

In fact, beer pong is serious enough of a competition that there’s actually a World Series of Beer Pong. Held in Vegas, of course. But there’s big time prizes (up to $50,000 or more) and the event draws visitors from all over North America. Pretty cool!

Do you Fill Beer Pong Cups with Beer?

Honestly, we never fill the cups with actual beer. The idea of people picking up that ping pong ball over and over drying to drop it in your drink is kind of gross. Besides hands, you never know how clean that table is!

What I like to do is fill the cups up with water instead. It gives them enough weight, but they’re not wasteful (or sticky) if spilled. Plus nothing goes into your drink. Players keep their own drink of choice close by and they chug that instead of the cup’s contents when someone scores on them.

No mess and everyone gets to drink what they prefer!

Playing on a team means you’re going to have to make some sacrifices and concessions. Try and find a team name that everyone is comfortable with, but that they also enjoy.

Best Beer Pong Team Names Based on Characters or Media

Hopefully after all that you have some inspiration when it comes to choosing the best beer pong team names for your group. Whether you’re playing at a house party, a bar, or somewhere else there’s plenty of reasons to get into a beer pong competition.

The most important part of choosing a name for your beer pong team is having fun with it! Whether that’s a name that’s funny, clever, referential, competitive, offensive, or something else that you dream up, make sure you pick a name that represents your team.