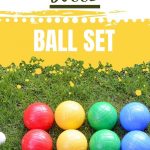 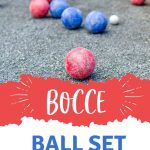 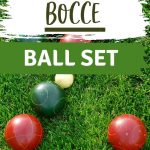 Afternoons in the yard getting dull? Looking for something everyone can play, without having to radically transform your outdoor space? Then your search might be over! Read on to find out more about bocce, what makes it such a popular pastime, and how to equip yourself for it. Spoiler—it doesn’t take much!

If you’re getting the impression the name sounds Italian, then you’re not far off: ‘bocce’ is the plural form of the word ‘boccia’, which literally means ‘to bowl’ (as in, the sport). It has some close relatives from other countries, such as the French ‘pétanque’. Worth noting that this is a completely official sport, with its very own governing body recognized by the International Olympic Committee: the Fédération Internationale de Boules.

Bocce is nothing if not accessible: it can be played on any area with a flat, level surface, it admits from two players all the way to eight (in two teams of two, three or four players each), and it doesn’t take a lot of strength to play, which makes it a good activity for all ages.

How It Is Played

First, choose your court. The standard size of a court for playing bocce is about 90′ long, and between 8 and 13′ wide, but you can make it as small as you see fit so as to adapt to the amount of space you have available; some courts are a mere 30′ by 8′. Once you have chosen your area, you might want to trace its borders; many professionally built courts are framed by wood planks, but you can use anything that will work for your choice of ground (gravel, cement, and so on). The important part is, it must be a level surface and decently firm.

The equipment you will need to play bocce is as follows:

Ready to play? This is how a bocce match goes:

1. A coin toss or similar mechanic (rock-paper-scissor, etc) is performed before the game can start. The winning player or team goes first, and also gets to pick their ball color. The one with the first turn stands at the edge of the court, and throws the pallino, trying to get as close to the center of the court as possible. Then, that player rolls one of their balls as near to the pallino as they can.

2. That done, the opposing player or team takes their turn. The goal here is to get their ball even closer to the pallino than the opponent’s, so as to ‘better the point’. To do this, they can either knock the rival’s ball out of position, or hit the pallino so it will roll away. If they succeed, the opposing side takes their turn. If the effort fails, then the next ball is played, be it by the next member of the team or by the single player, until the shot succeeds or all 4 balls are played on that side. If this happens, then the other side plays all its remaining balls.

3. Once all balls have been rolled, the round ends and scoring is tallied. Only the side whose ball is the closest to the pallino gets points, according to the following scale:

As you can see, it’s all fairly simple, which certainly helps explain its enduring popularity. Now, it’s time to check out some great sets, so you can begin playing as soon as possible.

Among its potential merits, this one is not regulation size, which may be a point in its favor if you happen to be looking for something that will more easily accommodate younger players. Balls are 90mm in diameter and 1 ¼ lbs in weight, and they are made in rubber, making them easier to grip and exceptionally safe for kids. The balls’ colors—red, blue, orange and yellow—and overall look are also likely to be a good fit. Aside from the pallino, a bag is included for carrying the set around, as well as a measuring tape for deciding close calls.

This could be a good option for anybody who is looking to get serious with bocce, as it is made in Italy—the cradle of the game—by a company that has supplied professional teams for roughly two decades. Aside from rigorously adhering to official standards in terms of size and weight, it comes with a 10-year breakage warranty, something that most other manufacturers won’t come to matching. The laser-engraved surface on the balls features the company’s logo, as well as the legend ‘Made In Italy’, so nobody who comes near this set has any doubt as to its origin. Bag for carrying included.

Although the balls are not the 107mm size that is the official standard for professional play, they are still within range, which means they can be used for serious matches. Same goes in terms of weight: manufacturer reports 2lbs, and several customers have stated they are hefty enough to feel up to standard, and to pose a suitable challenge during play.

The color scheme is more on the unusual side—black and red—, but this could very well be to their advantage, as it makes the balls more easy to tell apart during play. Within their color groups, the balls are further split in terms of their surface engraving, as two will sport circles, whereas the other two will come with squares. Bag for carrying is included.

It may not be of Italian making, but this one is still geared towards the aspiring professional: the balls feature regulation size and weight, the one deviation being the pallino, as it comes in yellow instead of the vastly more common white—though this is unlikely to be a detriment to your matches. Aside from the carrying bag most similar sets include, this one comes with a rulebook, to help those who are still new to the game in their learning journey. The bag in question is also remarkably strong, as it is made in 600D nylon, one of the sturdiest fabrics in use nowadays.

This is a good stop in case you’re looking for a set with more options on offer, as this one comes in two color and size schemes: you can get it evenly split between green and red, or with the balls paired off in four colors (red, blue, green and yellow). The colors may be more sober, or brighter, as well, depending on your selection. Whatever the palette you choose, you can get it in 90mm or 100mm sizes, which helps you cater to just about any sort of player, be it the smaller ones or those who want their experience to be closer to the official game.

The One That Brings All To The Yard: GoSports Backyard Bocce Set, Soft

For fun on the lawn, this one might be hard to beat: its size and weight don’t stray too far from regulation standards, and it still manages to be safer thanks to its rubber make. In this way, it might just be the most accessible set out there, since it can truly be handled by players of all ages without the slightest fear of injury.

Should this particular material not be to your liking, this very same set is available in traditional resin—with a finish that is reportedly quite resilient against chipping—, and there is even an option with LED balls so you can play well past bedtime. Whichever version you go for, they all come with carrying bag and measuring string; and they are quite affordable, too.