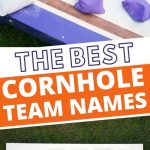 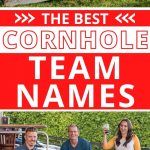 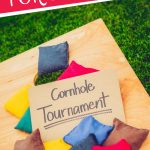 What is cornhole? We’ll cover that in case you’re unfamiliar with it but, suffice to say for now, it’s usually played in the backyard (among many other places), and you can have a team. That team will need a name; that is where we come in. Beyond covering the basics of this popular game, we’ll give you some great naming tips, for the crowd to chant as you walk into the field.

It is, in summary, nothing if not family friendly, and you can play it just about anywhere. It’s loads of fun, too!

As mentioned before, you don’t need a lot of stuff to set up a game. There are only two key parts:

Plywood is most common. It should be 47.5 to 48 inches long, between 23.5 and 24 inches wide, and ¾ inch thick; ½ inch is also allowed, but it should have cross-section backing. The hole should be 6 inches in diameter, right between the sides and 9 inches from the top; the surface should be sanded, polished (painted is also possible), so that bags may skid on it but not too much. Inclination is key: at the front, surface should be 3 to 4″ from the ground, whereas the back should be a full foot (12″) high.

8 is the standard quantity (4 per person/team), and they should measure about 6″ on each side; depending on your choice of measuring system, 450g or 16oz is a good weight to aim for. Canvas and twill are some common materials, and they should be different colors so as to tell who’s throwing what. Corn and beans are some long time favorites for filling, though nowadays beads made of plastic or resin are also a popular option.

Although you can purchase bags and boards on their own, it is always better to get equipped in one fell swoop. To this end, we’ve compiled a few options that allow you to procure everything to set up your first cornhole match, right out of the box. Some of them may deviate a bit from official measurements, but that doesn’t have to be a bad thing… it’s all about having a good time, after all.

If you want something that won’t be as cumbersome as an average cornhole set, you might wang to go for Himal Portable PVC Framed Cornhole Game Set. This one is ‘tailgate size’ which means the boards are a bit smaller than those used in official games (3 feet long instead of 4), but it doesn’t retract from the experience in an informal setting. The main feature here is that the boards can be easily put together and taken apart, the surface being a piece of fabric stretched taut on the PVC frame. Carrying it around couldn’t be simpler, as all the parts fit into a bag that is hardly bigger than a purse.

Pro: Extremely easy to transport and set up anywhere. Its price is hard to beat, too.

Con: So light it can slide around a bit when bags land on it.

For those who like it when their stuff doesn’t look so polished, GoSports Classic Cornhole Set – Rustic could be a good option. It’s all for show, of course—beneath the decals mimicking a worn look, barnwood planks and steel frame, lies a smooth, fairly lightweight (about 30lbs) board. The package includes 8 bags (4 red, 4 blue), and a carrying case. Worth noting that, although the bags are all-weather, the boards aren’t.

Con: Board is not firm—bean bags might bounce a bit after landing.

So far, we’ve covered sets in which the board may be smaller, less firm, or not even an actual board; however, we have not forgotten the aspiring pro. This ACA Official Set is built with the code in mind, from top to bottom, and inspected to ensure appropriate quality: the 4′ x 2′ boards are solid wood, ½” thick with cross-section backing, and the bags are also standard weight and size. Bean bags and included tote bag bear the Association’s logo. 4 decals for the surface are available, though it is unclear how to order anything other than the American Flag option.

Con: Such a level of quality and authenticity doesn’t come cheap.

Bonus: Playing In The Dark

This may come as a surprise, but there is no need to interrupt the fun just because the sun went away. All it takes is a special set of LED lights that goes on the edge and ring of your boards, like this one. After a fairly simple setup, you and yours can keep playing well past bedtime!

Okay, full disclosure—nobody that we’re aware of says that when starting a game of cornhole (but maybe they should). Cheesy titles aside, here’s how to set up and play a teams match:

This gets tallied at the end of the round. Bags that were sunk through the hole are worth 3 points; bags that stayed on the surface of the board count for 1 point. It’s legitimate to push a stray bag into the hole with a new throw… or push it off the board, which negates its point value. The team with the higher score subtracts the other team’s tally from their total. If, for example, red team scored 5 and blue team scored 2, then red team gets 3 points and blue team gets nothing. This is called ‘cancellation scoring’, and it means that only one team (the one with the highest results) scores each round. The game continues until a team accumulates 21 points.

There is not a lot of change when there are only 2 people playing; the main difference is that, as we mentioned before, only one board is set up, and both players throw at it. Everything else (including the 27′ distance, which should be somehow marked) is the same.

This is it. The field is set, the bags are lined up. The crowd awaits. And what will the announcer say, when proclaiming your arrival? Here are a few options you might like:

The Hole Enchilada. Spicy and packed with goodness.

Last Bag Standing. Your bag. That’s the last one that will be standing.

Loft and Pray. Because self deprecation never hurt anybody… in small doses, that is.

The Corn-ettas. For those two women that nobody would dare ignore.

Corn to be Wild! And bad to the husk.

The Bagnificent Two. When the field ain’t big enough for the four of you.

Cornadoes. For the team that is a force of nature.

Starchky & Husk. A whip crack of a name, for the crime-busting pair.

Coda: The Name Of The Game

Although the game is as family-friendly as they come, its name could have somewhat uncomfortable connotations depending on the audience—and if you do not quite understand what I am talking about, my best advice is to simply take my word for it. In case you or someone else would rather refer to this pastime in a different way, here are other names that are perfectly okay to use as well:

And also, you can call it simply ‘Bags’.