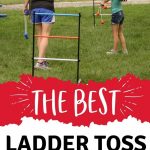 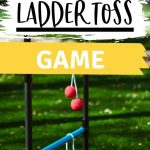 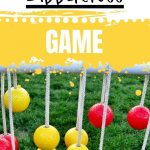 If you haven’t played it yet, you seriously have to give ladderball a try. You might love it so much, you’ll even want to pick up a set of your own! Oh wait, that’s why you’re here – well here’s the best ladder toss game for all the new fans and ladderball lovers out there to keep the fun going all summer long.

All of these ladder toss games are going to get the job done, but which one you choose is up to you. I’m going to give you my recommendation, though. It’s based on a few key things like durability, value for money, and whether it has a good gameplay experience.

How to Play a Ladder Toss Game

Ladder toss, also known as ladderball or ladder golf, is a relatively newer yard game. It really didn’t take long to become a party staple, though! The object of the game is to hook your bola, which is essentially two balls attached together by a rope, onto one of the rungs of the ladder.

That sounds easier than it is, though. There’s some strategy involved in how much strength you use, the type of throw, and of course making sure that it connects with the target.

The top rung is worth 3 points, the middle rung 2, and the bottom rung just 1 point. You don’t score anything for missing the ladder or for your bolas getting knocked on the ground. You can also earn a bonus point by getting all three bolas on the same rung without your opponent landing on it or getting one on each rung.

That’s not the whole game, though – the real strategy comes with the way gameplay and scoring works. First of all, both teams take turns throwing onto the same ladder. This means that you can actually knock your opponent’s bolas to the ground.

There are some variations on how the game is played depending on who you ask, but the general consensus is that two teams compete and the first one to reach exactly 21 points is the winner. If you go over, though – either some or all of your points are taken away and you have to start again.

Variations also change how scoring works, so take a look at the Wikipedia page for some inspiration.

Amazon Basics is Amazon’s own “store” brand, but it really isn’t all that bad. This set is no-fuss, value priced, and even comes with a carrying case. If you’re new to playing ladder toss then I think this would be a great first set.

While it’s not fancy, it is still pretty good quality. That means that you’ll be able to enjoy it all summer long and bring anywhere you’re gathering with friends.

Best for: Someone looking for a basic set

Even though this is a wooden set you can still take them apart for transportation. It’s super convenient that you don’t need to completely disassemble a bunch of screws or allen keys. Instead, all you have to do is twist the nuts to set up or take down this ladderball set.

Since it’s solid wood, this set also looks better set up than plastic or metal versions.

Best for: A wooden look without losing portability

This is a great little set if you want something compact that you can easily bring along to different events. It’s made from plastic so the set is lightweight which means carrying isn’t an issue.

Despite its lower price tag, this set still stands out. Especially since it has real golf balls – not cheap plastic replicas!

Best for: Someone who wants a sturdy set that can still be moved around

This set has a slightly different base than some of the other ladderball games on this list, so it’s worth talking about. Instead of coming apart, this Franklin Sports ladder ball set actually folds up. Which is way more convenient, in my opinion.

The balls are hard, but the set is made from plastic, so you might get some denting. Unlike other ladder ball sets the base is also not quite as sturdy (because it folds) so you’re more likely to knock it over. That can be kind of fixed by putting a weight on the legs or burying them slightly.

Best for: Portability/easy set up and tear down

You’re almost always going to get a great quality product when it’s made of solid wood, and this ladder toss game is no exception. Everything – from the hardwood frame to the solid golf ball bolas – feel high quality in set.

It comes with a carrying case and can be assembled without tools, although this is also the kind of set you might want to leave set up in your backyard all summer long.

This isn’t strictly a ladder toss game, but it does deserve a mention because it contains ladder ball, plus it doubles as a cornhole set and a fold up table. Talk about multi-purpose!

It’s a lot heavier than traditional ladder ball sets, but that also makes it super sturdy. One drawback is that the balls aren’t great quality – something that could be fixed by replacing them with a better quality set.

Best for: Someone looking for a multi-function set

What is the Best Ladder Toss Game?

Wooden ladder toss games might look better, but you just can’t beat the versatility of the PVC style sets. It’s super easy to put together and take apart, which means transporting this set is a breeze. And you’re going to want to take it with you to the beach, camping trips, or other outdoor events!

Another thing I really love about this ladderball set in particular is the scorekeeping. No one wants to bring a pen or keep track of the score on your phone, so the sliders are perfect.

Finally, I really appreciate the real golf balls on the bolas. It makes a huge difference when playing ladder golf!

It’s surprising how much variation there is in the different ladder ball games out there, to be honest. Hopefully our choice of the best ladder toss game lives up to your expectations and helps you enjoy playing ladderball with family or friends all summer long!

Even if you don’t grab our pick, though, all these ladder golf games are going to do the trick. Just pick the one that has features or style that works for you! Remember, ladder toss is more about strategy than strength, so make sure to get some practice in before you challenge your friends.