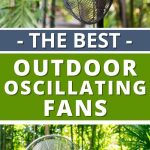 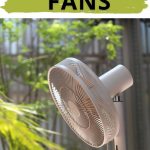 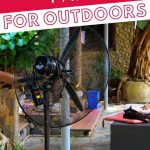 There is probably nobody among us who won’t look for some way to stay cool during the hotter months. A favored solution for many —me included—is an oscillating fan, since it’s cheap and easy to use. This trusty appliance can keep you company outside as well… as long as you choose the right one!

Oscillating fans have remained a staple of homes and shops the world over for generations, and there are reasons for their enduring popularity. Here’s a breakdown:

Economical: And it’s not just price. An oscillating fan will consume but a fraction of the energy spent by an air conditioning unit.

Air flow: Its trademark feature is that it has a certain range of movement, sending air at a wider area than a fixed fan. That’s without mentioning its adjustable height and tilt, which give you even more freedom when deciding where to direct the flow.

No installation needed: Plunk it down, plug it in, done! And if you don’t like where it stands for any reason, or you need it elsewhere, it’s supremely easy to carry it around from location to location.

Time has not gone in vain for this reliable appliance: nowadays, you can find models with additional perks such as variable speeds, shutdown timer, remote control, and more.

Most products that run on electric power are intended for operating inside the house, where there is no exposure to the elements to worry about; bringing one of these out in to the open will, in fact, void the warranty more often than not. For your comfort while you’re outside, you need something that will operate just fine under slightly harsher conditions than those of your living room.

When shopping for electronics, it’s good to find out as fast as possible how suitable they are for bringing outside. To help you with this, certain trustworthy organizations have created systems to rate the sort of exposure an appliance or device is designed to withstand.

It may be interpreted as ‘intellectual property’ at a glance but, in this case, IP stands for ‘ingress protection’. This standard was created by the International Electromechanical Commission, or IEC, and it is designed to rank how well protected a device is against dust or water. It is constituted as follows:

The first number is for solids, ranging from 0 (no protection) to 6 (dust-tight). The second one corresponds to liquids; a 0 means there is no protection, and it can go all the way to 9, which indicates protection against high-pressure jets of water coming from any direction. An X on either position means the relevant protection was not tested. It’s not rare to find devices whose IP rating spots an X in the first position, and it doesn’t have to be a cause for immediate concern. As long as the water protection is high enough (say, IPX7), it’s safe to assume resistance to the ingress of solids is decent too.

You can read more about IP rating straight from the IEC by clicking here.

This scale stems from the National Electrical Code, or NFPA 70, and it designates the environmental conditions an appliance can endure: ‘Dry’ means it can only be use inside, where there is little to no ambient moisture; ‘Damp’ indicates the item will be okay in locations where the air might be (or routinely is) high in water vapor, such as a bathroom, a sauna, or a covered outdoors area; whereas products marked as ‘wet’ will not be affected by rain and can therefore be used in uncovered areas such as pergolas.

When shopping for anything electronic, it is strongly advised to favor products that are UL or ETL listed. ‘Damp’ and ‘Wet’ rated items will indicate so clearly; ‘Dry’ rated ones will only show as listed.

Standing Tall And Standing Out

What follows is a list of models you might want to consider taking home, due to their looks, functionality, or both.

Its looks set it a fair bit apart from other similar models—it is more ornamented than most, and it even offers more than one color—, but this one also deserves special consideration if you happen to be looking to equip an area without cover: it is ETL “Wet” listed, which means it has nothing to fear from rain.

Other factors of its design are geared towards the outdoors life: it is built in stainless steel, its finish is all-weather UV resistant paint, and its base is weighted, so it won’t topple over if it gets hit by heavy winds. Its 45W motor can run at 3 different speeds, ranging between 900 and 1280RPM.

It’s rated IP44 in terms of protection, which means no solids larger than 1mm will make it into the enclosure, and it can also safely endure splashes of water from any direction; therefore, this one can be used in areas that are not shielded for rain, even if it is not specifically rated “Wet”.

This model also comes with a feature that is not common among similar products, and which is thus worth mentioning: plug the built-in hose into a suitable water source, and the outer ring of the fan will provide a fine mist which will greatly help in cooling you down. Worth noting that this feature is not mandatory: the fan will perform just fine without the misting function engaged.

The same design is available in indoors version, and the outdoors one we’re focusing on, which you can choose in either black, silver or white. Motor and fan are waterproof, the plastic parts are UV resistant, and the outlet is outdoor rated.

It is an option worth considering if you like additional features: the base is wheeled, which makes it quite easy to change its position, and the wheels can be locked so it won’t roll out of place while you’re not looking. It comes with a remote control, digital LED display, and it can be programmed to run between 1 and 8 hours. Aside from the fairly common 3 speeds, it also comes with 3 modes (natural, outdoor, sleep mode) to optimize its operation depending on the situation.

If you like to monitor and operate as many of your appliances as possible with your smartphone, then this one might be what you need, as it is compatible with the MiHome app. Everything is accessible from there: speed, which can be picked from a full 100 available; direction and angle; as well as mode, between standard and natural.

Worth mentioning that this one runs at just shy of 29dB, which is just below a whisper in terms of noise. It can also operate without a cord, which expands its range of function—it’s not always critical for there to be an outlet where the fan is going.

It’s not a standard sort of fan, but it works: by design, it is built to withstand the elements—including rain—, so it can stay out there for as long as you need it; and it does provide oscillation to keep the air flow going at different directions. It comes with 4 speeds, including one called ‘Night Breeze’ mode that makes the appliance operate with less noise.

It comes almost completely put together right out of the box; all that needs done is snapping the base into the bottom, and you’re done. It only weights 15lbs which, coupled with the handle at the top, makes it fairly portable.

There is the potential wrinkle of the remote arriving sans battery (although the user’s manual mentions ‘[it] is supplied’) but, other than that, this is a pretty solid unit: the motor and fan are waterproof, the plastic is UV resistant, and it comes with functions that, though not rare, are also not a given, such as timer, LED display, and a sleep mode that will keep the motor running more quietly so your nightly rest remains undisturbed. Its base is wheeled—and it can be locked in place—, which means you can effortlessly change its location; and, when it’s not in use, you can store the cord in the back.

Per the user’s manual, remote runs on a 3V CR2032 coin cell battery—in case it arrives without it.

Thanks for checking out our picks for the best outdoor oscillating fans! Leave a comment down below if you have any questions about what you should know before you buy. Also, if you’ve ever used one of these fans we’d love to hear from you in the comments!