Best Solar Lights for a Gazebo 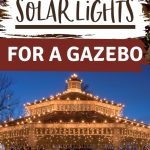 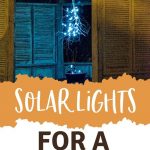 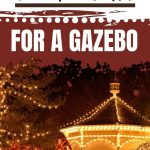 Anyone who’s enjoyed relaxing in a gazebo with some close friends or family knows just how nice it can be to get away in these little outdoor retreats from time to time. They’re a great way to take in your summer, keeping the bugs out and letting the sun and fresh air in. While it’s a great way to mix some shade with a meal that you can keep away from the flies, it doesn’t make for much of an entertainment space for once the sun goes down. To keep the party momentum going, we’re going to help you find a lighting solution that works for you. These are some of the best solar lights for a gazebo.

These are the Best Solar Lights for a Gazebo

Solar lights come in all shapes and sizes, and cover a whole host of different needs depending on what the particular application is you’re looking to use them for. We’re going to look at a variety of gazebo lights to determine which are the best models in each category. If you haven’t considered using a solar light system, you’re definitely not alone. Here’s what you can expect from this kind of lighting solution.

Can you use Solar Lights to Light a Gazebo?

Absolutely you can, and you’d probably be surprised as to just how effective this form of lighting really is. While traditionally solar lights have been relegated to uses like adding a little bit of extra light to pathways, or as an ambient design element to a pergola, they’re actually quite a bit brighter, and more versatile than you might expect.

Primarily, the lights in our reviews are mostly meant for lighting the inside of a gazebo. That being said, some of them would also make a fantastic choice for adding some ambient light to the inside of the structure as well. The lights featured here are good for either use, but you might find that they’re more efficient at lighting the space while doing so in style!

There are many different options to consider for the solar charger that the light itself will actually be using. In this case, we’ve only taken models of LED solar lights into consideration that you’d be able to power while they’re installed in a gazebo. In other words, the solar panel charger and battery unit for the solar lights sits outside of the gazebo while they’re installed so that it can adequately charge.

What’s the Best Way to Install Solar Lights in a Gazebo?

There’s a couple of different types of solar panels you’re going to find across different models of solar lights that are suitable for gazebos. These include roof-mounted solar panels, and ground-stake style solar panel chargers. These are each viable for installation in and around a gazebo, although you may have a preference depending on the layout and surrounding area of your own gazebo or pergola.

Below we’ll dive right into some reviews for some of the best solar lights for a gazebo!

Brightest Solar Light for a Gazebo

It might not look it, but this is a fully functioning overhead light that’s perfect for use in a gazebo. The lamp-head design casts a magnificent amount of light, and it’s capable of motion sensor functionality as well. Despite the fact that it comes out of the box with this motion sensor functionality, you’re absolutely free to use it as an ‘always on’ light via the remote control that’s included in the set. Why do we recommend a solar light that’s primarily designed for outdoor use in the elements? Quite frankly, it’s really bright! Other reviewers love the light that this thing throws off, comparing it to traditional LED light fixtures, the positionable heads, which are a part of the split design of this light, allow you to cast the light wherever you need it. That being said, this is exactly what makes it a great light to install in a gazebo with a tilted roof.

Fully waterproofed and including a safe and easy to use installation bracket, this hanging solar lamp is perfect for lighting up your gazebo. Why does this one make our reviews? Quite frankly, this is a hanging solar powered light that doesn’t look solar powered at all! It comes with a woof mounted panel, and remote control functionality. Where this thing shines is in its design, practical cord length of almost 16.5ft, and a truly bright light. Worried about how much charge you’re going to get off of this thing if you plan on pulling an all-nighter? Fear not, this light can last anywhere between 12 and 24 hours if you’ve got in on an 8-hour sunlight charge. For it’s design, look and feel this light will also jive with just about any design you’ve put into your gazebo, too!

These string lights provide a much softer touch in terms of the type of light they’re putting off. That being said, it’s still substantial enough to light up your gazebo on its own. They’re also commercial grade LED solar lights that are totally shatterproof, while still maintaining a totally vintage look and feel. The package includes a solar panel stake charger. This is a great example of a unit that doesn’t need to be mounted on the roof. Instead, the solar panel simply sits on a small stake that you can affix to the ground anywhere around the gazebo itself. Just be sure that there’s some dirt or grass nearby for it to secure tightly! As a bonus, you can safely tuck it away inside the gazebo during the winter months if you’re not using it. With an eclectic vintage look, these edison style bistro bulbs bring ambiance and a soft white light to your gazebo!

These globe shaped fairy lights are a magnificent way to bring some extra character and ambiance to your gazebo while also keeping it lit up at night! As with the other models in our reviews, we went out of our way to bring you light that doesn’t just light up the inside of your gazebo, but looks great doing it! These lights are no exception. They consist of 23ft of 50 LED fairy globe lights that create a truly spectacular lighting setup for the inside of your gazebo. Alternatively, you could also hand these under a pergola, as they’re completely waterproof. They come with a small stake solar panel which sticks straight into the ground muich like a walkway light. For a cross between practical and decorative, we couldn’t recommend this set of lights more!

Alright, if you insist. We might have forgotten to mention, but of course they have color changing outdoor LED solar panel lights. (And, they’d be incredible for a gazebo party!) These aren’t just decorative lights, though. They also have a plain LED light mode, and come in a fairly neutral Edison build style spread across a 48 ft strand. They’re remote controlled, and perfect for throwing the ultimate backyard blast! Choose from 12 different colors, and use the included remote to adjust the brightness to create the perfect ambiance, or party atmosphere!

Thanks for checking out our reviews of the best solar lights for a gazebo! Each of these solar lights feature LED’s which don’t just give off a clear bright light for all of your entertaining needs, but will also last thousands of hours. The housings are completely waterproof too, meaning you don’t have to worry about leaving these out in the elements, either. If you have any experience with solar powered lights, leave a comment down below for other readers to learn more!