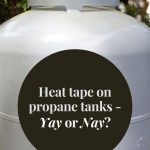 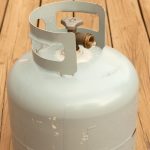 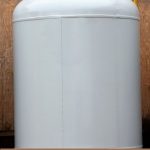 Can You Put Heat Tape On A Propane Tank? How Freezing Can Even Happen

It may sound silly, that something involved in providing heat could even be affected by cold—all the way to the point of not working properly. To understand the why, we have to go into certain concepts that don’t often get discussed.

It begins with the fuel itself: propane is also known as liquefied petroleum gas, and it is so named because its starting state—in the tank, before you open the valve to make use of it—, is liquid. Propane turns solid at a temperature of -306°F (the lowest ever recorded on earth is -128.6°F, in case you were wondering), and boils, i.e. vaporizes, at -44°F. Propane is stored under pressure within your tank, to prevent it from turning into vapor. When you open the valve, pressure drops, which frees the propane up to become a gas and flow through the hose towards the burners. Aside from no flow coming when you open the valve, another fairly easy giveaway is frost forming on the tank’s surface. So! How can it get to this point? There are three possible ways:

Ambient temperature. Not common, but also not unheard of. If the surrounding area gets too cold, then the propane will not boil when the valve opens, and will therefore not come out.

Part of the process. As the vaporized propane moves out, it draws heat from the air around it through the walls of the tank, making it cold (something you may have observed if you have ever used a can of compressed air). This forms condensation, which can then freeze on the tank’s surface if the ambient temperature is low enough; which, in turn, can make the propane so cold, it won’t be able to vaporize.

Other parts freezing. Handle, valve and regulator are always exposed, and even if the temperature isn’t terribly low, these components can freeze, such as if there is condensation in the air that settles in and later turns to ice (similar to what we talked about on the paragraph above). If the valve cannot turn, or the vent gets stuck, then you won’t be getting any gas out of your tank.

Is a frosted-on tank a hazard? Not by itself, as there is no propane being released into the area. It is, however, something that should be addressed if you want your tank to work the way it is supposed to.

Can You Put Heat Tape On A Propane Tank? The Tape That Heats

Heat tape is, in simpler terms, a heating element, except more flexible and wrapped in silicone. The principle is the same used for your stove or your ambient heater: when a current is sent to run through the electric cord within the plastic, it generates resistance, which in turn radiates heat. It comes flat, wrapped in silicone, which is commonly used for pipes; and braided, which is more optimal for gutters and is used mostly by professionals such as contractors.

Short answer: nay. Why? Because the heat it delivers is not exactly regulated, and there is a certain chance of achieving the opposite effect—raising the propane’s temperature more than safety allows. Silicone heat tape, in fact, can heat up too much (and even spark) if it overlaps; braided heat tape is not so risky in this regard, and there are some sources that posit that braided heat tape could do in a pinch, since it is not so much at risk of overheating or self combusting. In our opinion, however, it should be completely avoided, especially considering there are perfectly good options that don’t compromise on safety.

Aside from the risks it poses, another drawback posed by heat tape is, it only solves one problem: ambient temperature. As we discussed before, there are other factors that can cause your propane tank to stop working during winter, and each one of them has specific measures to counter it.

The solution to this one is pretty simple, perhaps to a surprising degree: a blanket!, of sorts. You can use an actual electric blanket to warm up your tank (carefully), but you can also opt for an actual tank warmer, which is a much more straightforward solution, specifically intended to address this issue. They come in different sizes, too.

Whatever you cover the tank with, always remember: the valve, regulator and vent should remain uncovered at all times.

As the pressure drops, the tank becomes colder, which may bring the propane to temperatures below what is optimal for vaporizing. This can be addressed by paying attention to how you open the valve: do so slowly, and only as far as you actually need, so the pressure (and the consequent loss in temperature) won’t be so abrupt. Keep the regulator in good condition; if it is faulty, it might keep dropping temperature too fast no matter how careful you are when opening the valve.

Speaking of pressure: keep an eye on how full the tank is, and top it up whenever possible. The closer to empty a tank is, the more vulnerable it is to frosting.

If they are already frozen, then there’s nothing to do about it except play the waiting game—that is, waiting for said parts to unfreeze so you can use the tank. Prevention can go a long way: if at all possible, keep the tank indoors, especially during snowy weather. If there is no other choice but to leave it outside, then you can protect the valve, its handle and the regulator with a milk carton, always making sure to keep the vent free from any obstructions.

When possible, it is a good idea to face the vent down, to help prevent ice and condensation from gathering around it.

If the Valve Gets Stuck

If frost gets to it and it can’t move, the best thing to do is simply to wait for it to thaw out. However, unlikely though it may be, the valve might end up, well, trapped. It could be because rust finally got to it, or it was too tight when it froze over—whatever the cause, if you come to the conclusion that it absolutely must be worked on, just make sure to do it appropriately. Here’s how:

Can You Put Heat Tape On A Propane Tank? Conclusion

As critical as propane tanks can be to our comfort—or even survival—during the winter months, they should be handled with proper care so they will not be rendered useless under a certain combination of circumstances. Heat tape is, definitely, not an optimal solution for this, but that doesn’t mean we are without options. A measure of prevention and the right alternatives applied at the proper time, will ensure your tank will be in working order no matter what the weather throws at you.

Can you Have Lava Rock and Fire Glass in the Same Fire Pit?