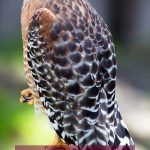 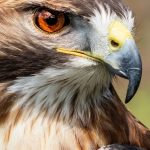 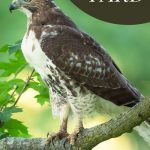 Hawks are majestic creatures, but they can also be a pain when they’re in your backyard. They’re also protected in many places, which means you’re not allowed to harm them even if they’re causing trouble. Here’s how to scare hawks away from your yard safely and without harm.

How to Scare Hawks Away From Your Yard

Hawks are most active during the day so chances are you will be able to catch a glimpse of them if they frequent your yard. On average, hawks kill one prey each day.

If you have some dead critters in your yard and suspect it’s from a hawk you can usually tell by the way the animal is killed. Hawks will pluck the feathers off other birds – often leaving them in a ring.

Keep Hawks Away From Small Animals

Since hawks are prey birds they’re always on the hunt for small animals to turn into their next meal. When it comes to neighbourhood pests like rodents and snakes, hawks are a welcome addition to the ecosystem.

This is all good and well until you have pets and livestocks that become the target of a hungry hawk.

While a bird can’t pick up anything heavier than they are, unlucky puppies, small breed dogs, kittens, and chickens can sometimes fall prey to predatory birds. Anything under 5lbs can be picked up by most mature hawks.

Bigger animals can also be attacked by hawks even if they’re not able to carry them away.

Supervise small pets outdoors if hawks and other predatory birds frequent the area. If you have chickens, quails, or other small livestock putting a cover over their pen might be necessary to keep hawks out.

If you like to attract wild birds to your yard, hawks might also frequent for the easy prey.

Removing their easy food is a good way to get hawks to be less interested in returning to your yard.

Backyard accents that are meant for decoration can sometimes become great hawk perches. If possible, remove any structures that you see hawks enjoying. You can also install commercial anti-perch devices that prevent hawks from getting too cosy.

If they’re perching on trees you should also trim those branches.

Hawks don’t like humans and they tend to avoid noisy areas. Loud wind chimes are a great way to keep all kinds of birds, including hawks, away from your yard. But these don’t always do the trick.

Clanging pots and pans are an easy hawk deterrent. You can use old ones that are lying around or hit up the thrift store. Hang them in a way that they’ll clang together in the wind. If you see a hawk in your yard, clanging pots and pans loudly is also a way to frighten it off.

Finally, keeping an air horn on hand can really give a visiting hawk a jolt. The same goes for firing a shotgun in their direction (but not at the hawk!) if you live in an area where it’s legal and safe to do so.

The biggest downside to this is that the noise only works in the wind or when you see a hawk. Banging and air horns can also be a nuisance for neighbours.

When being noisy isn’t an option ultrasonic might be the solution to keeping hawks away without annoying the neighbourhood. There are a few things to consider with one of these devices, though.

First of all, it will also repel other types of birds. Not all birds are sensitive to ultrasonic sounds, but many will stop visiting if you install one of these devices.

Second, if you have pet dogs or cats make sure the frequency is set up properly. The sound can disturb them too.

Third, it’s possible for hawks to get used to the sound. Another problem with hawks is how high they fly – they might be circling and not hear the sound, and ignore it while swooping.

Finally, while some people swear by ultrasonic pest repellers there’s mixed research on whether or not they actually work.

Think about how a hawk hunts for a minute. They fly high and circle around, looking down for prey. If they can’t see the birds they’re trying to hunt, a hawk usually won’t bother coming into your yard.

By installing covers over bird feeders you can break the hawk’s line of sight. That way birds, who you otherwise might have been luring to their death, can enjoy their meal safely.

Hawk and owl statues are both effective ways to keep hawks out of your yard. Since these animals are territorial they’re not going to mess with a place they think is already being controlled by another bird of prey.

Scare crows, believe it or not, also work to keep hawks away. They don’t want to mess with humans!

Of course, if you want this to work you have to move the decoy or scarecrow every day or two or else hawks will learn to ignore it.

Get a Guard Dog

Hawks might be a risk for small animals but bigger dogs can easily frighten them off. If you have a hawk problem on a rural property, outdoor dogs are an easy answer. They’ll also help chase away other intruders like rabbits and deer that might eat your garden.

You’ll want to choose a dog with a high prey drive. Friendly dogs, especially ones who are trained for bird hunting, won’t do you as much good when it comes to hawks.

Instead, pick a breed that will naturally try and chase off everything in sight. Of course, you don’t want a pet that’s too aggressive, but even friendly dogs can be trained to protect their territory.

Almost all birds are distubed by sudden flashes of light. Actually, most animals and even humans get bothered by something shining in their direction! Use this to your advantage and install reflective devices around the yard.

Hawks get confused by the light. Since it’s irritating, they’ll avoid the area.

They’re usually inexpensive and you can even get ones that look nice, too. Just make sure they’re strategically placed to catch the sun.

You can also recycle old CDs and similar reflective items.

Once hawks realise all these shiny objects aren’t a threat they’ll be back. To prevent this, make sure to move them around every couple of days.

Protect Your Poultry aka Protect Chickens from Hawks

Keeping your chickens under wire fencing or netting is one of the best ways to protect them from hawks. Once hawks learn there’s no longer an easy meal they’ll usually move on. It may not be the most visually pleasing, but creating a large covered enclosure will protect your chickens from quite a few predators.

If you have chickens you can also consider getting a rooster. They’re naturally driven to protect the chickens and will actively attack hawks that threaten the flock.

If you’ve ever crossed a rooster you already know how vicious they can be! Those claws do some serious damage. Even against a hawk.

Deter Small Animals From Your Yard

If all these methods fail, it might be time to get rid of all the potential hawk food. Remove all sources of food for small animals. That includes bird feeders, bird baths, plus anything else critters enjoy.

You can also take steps to reduce the rodent population in your yard. Rodent traps and harsher controls like poison can help get rid of them for good.

If your garden attracts bunnies and other animals, protect it or avoid planting for the season. Make sure you clean up fruit from bushes and trees quickly, too. Animal-proof all your trash cans. Destroy nests.

It’s drastic, but it’s a good last resort if nothing else works.

Sometimes a stubborn hawk just won’t go away. Since you can’t kill it, relocating it to a new home is the only option. There are professionals out there who trap wild hawks and move them to a new habitat where they won’t be a nuisance.

Hawks get moved between 75 and 100 miles away to prevent them from returning!

In the US, permits are required to trap and move hawks. Don’t try and do it on your own.

In Canada, the United States, and Mexico hawks are protected and can’t be harmed. You’re not allowed to shoot them, poison food, or damage their nests. Farmers can sometimes get special permission to shoot a hawk, but only if they’re causing damage to livestock.

Things To Remember While You Scare Hawks Away From Your Yard

Hopefully you have a few things to try to scare hawks away from your yard. The biggest thing to remember is that hawks are intelligent creatures. They catch on to deterrents quickly, so move decoys, scarecrows, noise makers, and reflectors often.

Your best bet to keep hawks away is trying multiple methods at once. Strong prevention combined with a mixture of reflective, sound, and decoy objects throughout the yard will usually be enough.

Hawks especially hate human activity so the more you’re out in the yard, the more likely it is for the hawk to move on to safer territory.

How to Hang Patio Lights Without Nails

How to Hang Patio Lights Without Nails

How to Clean Concrete Patio Without a Pressure Washer