How to Stop Fire Pit Rust From Taking Over 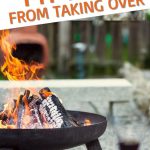 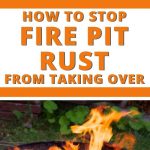 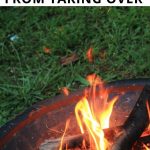 Unless your fire pit is in the older style—a hole in the ground—, odds are greatly in favor of it being vulnerable to rust. To many, it may be a nice aesthetic accent, but it’s still something that must be kept in check. In this article, we will go deeper into why it happens, what to do to clear it out, and how to stop fire pit rust from happening again. Here’s how to stop fire pit rust from taking over!

Tips for How to Stop Fire Pit Rust From Taking Over

Can You Use a Rusty Fire Pit?

In case you’re wondering, it’s perfectly harmless to start and maintain a fire over a piece of rusty metal; there are no fumes or chemical reactions to worry about. That said, there are other dangers, such as someone getting scratched by a pointy bit with rust on it, or the bottom decaying to such a degree that ashes and wood fall through. In other words: you can use a rusted fire pit, but it is better not to.

Will My Fire Pit Rust?

The answer, in almost all cases, is yes: even copper will eventually begin to show it; and although many find the resulting patina attractive, it is still a sign of decay that should not be taken lightly. Stainless steel, while not completely impervious to rusting, will take a comparatively long time to present rusting, and it won’t be so quick to degrade.

Rust Types and Their Causes

Most of us know the formula: iron plus water plus oxygen. When it comes to a fire pit, certain circumstances can increase the odds of rust developing (aside from good old rain, of course): temperature changes, moisture in the air, and being too close to the sea—which means saltier air.

Not all rust instances are created equal, either; and some are harder to clear out than others.

Appears in a matter of hours, usually following exposure to rain or to power washing. It shows as runny patches marking the downward flow of water as it fell on the surface. Fairly easy to clean.

Easily recognizable as a rather uniform coating all over a metal part that has been left unattended and exposed to the elements. Not too hard to deal with, but will require more work.

This occurs when the paint used to treat a metal piece is of low quality, or the coat was too thin. It eventually develops hairline cracks, which begin the oxidation process. Soon enough the rust beneath the paint expands, forcing the paint outward and causing that flaky appearance. In this case, it is better to peel off the paint before removing the rust underneath.

One of the worst threats to anything metal, it is fortunately rare on fire pits. Certain molecules, such as chlorides, can interact with the metal, starting a rather aggressive process of oxidation that is hard to spot and the onset and will often doom the affected metal piece due to how it weakens its structure. Easy to recognize as it forms holes and air pockets on the metal’s surface.

The good news: pitting rust can be removed, as long as the metal in question is not too weak. The rust itself can be cleared away just as you would other types (more on that soon); then all that’s left is to scrape or sand blast the pockmarks

Depending on the type, and also on how long it’s been allowed to thrive, rust can be easier or harder to get rid of. What follows are several alternatives to tackle it, from milder to tougher. If you want to learn how to stop fire pit rust from taking over, the first step is to remove existing rust spots.

If your rust is mild, (flash rust, for example), then one of these alternatives should serve you well. Whichever you choose, the method is the same: apply to the affected area, allow to sit for about 10 minutes, wipe away with a piece of cloth, then rinse. This last part is important, due to the element these choices share: acid.

Sometimes, you just have to step up your game, and certain products can help you do just that; just don’t forget to follow their directions.

So far, we have stopped rust in its tracks. It is now time to learn what to do so that it will not appear again.

This is the most basic line of defense for anything metal against the elements and their consequences. Options vary: some suggest simply applying a rub of kitchen oil, or a lubricant like WD-40—although this one does come with a stronger smell. Any of these should work well enough.

Having said that, in our opinion, there’s nothing like using a product specifically designed for our purposes: paints like this one can provide optimal protection against corrosion, and they are also resistant to the high temperatures a fire pit has to work with. This last part is important because you will usually have to retouch the finish periodically, so it won’t flake; and something that can take the heat will stay in place for a longer time.

It goes without saying: the surface in question should be clean and rust-free before you apply your finish of choice.

Aside from it being better if you start a fire when there is little to no wind, it is easier to keep your fire pit from rusting if you don’t expose it to rain. In case of cloudy skies or if the forecast says to expect showers, it is better to abstain.

When it is not in use, your fire pit should be somewhere with a roof (and also, preferably, walls): a shed, the garage, the deck, you name it. It doesn’t hurt to use a weatherproof cover, whether it is in storage or simply between uses; this will help prevent any bits of debris from landing of it, which can then collect moisture. This one, made in 600D polyester (the thickest in the market), comes in different colors, shapes and sizes. Its laminated undercoating makes it even better at keeping water at bay, and several cords and buckles give it a more snug fit, so it won’t be easily blown away.

Moisture does not come only in the form of rain or water vapor; it can also be on the ground, or in grass. Even if the fire pit comes with a stand, it is a good idea to place it on top of stone pavers to ensure nothing will come to the underside.

A typical bonfire will reach temperatures beyond 1500°F, sometimes surpassing 2000. While your fire pit is appropriately built for its purpose, such extreme temperatures will eventually wear out its metal, and any coating covering it. Setting your firewood over a base of fireproof sand will help preserve the fire pit’s integrity and maintain its protective coat for longer.

6. Let Your Fire Go Out on Its Own

Snuffing the fire out causes the fire pit to quickly drop temperature, which will eventually weaken its metal; this is especially true when using water. Allowing the fire to die out lets the fire pit cool off gradually.

It should go without saying but, this rule need not apply in case of an emergency; it is, in fact, often recommended to have a bucket of water ready at all times while a fire is ongoing. Sand is another good alternative, and it doesn’t cool off your fire pit so suddenly. The best choice is, of course, an extinguisher of the right type.

7. Clean It After Every Use

Excessive though it may seem, it’s actually fairly important. As we mentioned before, any foreign bits allowed to sit on the fire pit for long enough will eventually draw moisture in; the same, and at a higher magnitude, can be said of the pile of ashes left after your fire dies out. What’s more, ashes are naturally acidic—and nobody wants that sitting there for longer than absolutely necessary.

Before doing anything, it’s important to keep a couple things in mind. Now that you’ve learned how to stop fire pit rust from taking over, make sure you avoid these common mistakes:

No hosing. You may remember what we said about flash rust; how it appears usually after something metal is rained on, or pressure washed. Using a hose is fairly similar.

Don’t work on a hot fire pit. Any cleaning should be done at least 12 hours after your last fire. You can verify if it is cool enough by first approaching the back of your hand to the ashes, to feel for any remaining heat; if you feel nothing, place your hand flat on the pile. If the pile is cold to the touch, then you’re good to go.

Now that our fire pit is ready, let’s go over the cleaning process.

8. Watch for Early Signs of Rust

However diligent we may be, it is always possible for rust to develop: perhaps we forgot to cover the fire pit that one time, or it has been a while since we last retouched its finish. Whatever the case, a good way to keep rust at bay is to spot it early; this makes it much easier to remove and prevent. A good once-over before every use—and periodically while it’s in storage—should suffice.

Use These Tips: How to Stop Fire Pit Rust From Taking Over

In summary: as nice as a patina may look on your fire pit (and this is especially true for those made in copper), rust is still decay, and should be addressed appropriately; not doing so will result in the fire pit becoming too weak for use, or dangerous if anyone brushes on the wrong pointy bit. Prevention is not overly complicated: a fire pit that is kept safe from moisture, with a fresh protective coating, preserved from the worst of the heat, and cleaned regularly, is a fire pit that will stay strong and reliable for many years to come.