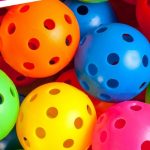 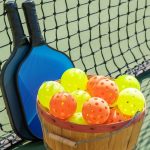 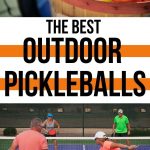 Let’s face it: tennis can be a bit of an onerous sport in nearly every way, from the space it requires to the demands it puts on the body; difficult for younger kids to pick up casually, too. For those situations, an easy solution is pickleball, a little known but very family friendly sport—as you will soon see.

Not very surprisingly, this game was invented by a group of parents, which may help explain how friendly it is to all ages. Originating near Seattle, WA in the 1960s, pickleball draws inspiration from (and is played similarly to) badminton, ping-pong, and tennis. Elements from these games can be seen throughout the rules, court and equipment:

Although it was first intended for kids (and initially its popularity grew by way of a commercial brand), pickleball has slowly transformed into a fully professional sport, with its own governing organizations both at US and international levels. The basics are as follows:

1. Play begins with a ‘serve’ that must always performed underarm; the paddle must not be above waist height when striking the ball (some exceptions apply). The ball should be sent diagonally towards the opponent’s court, who must now send it back also with an underarm strike. The ball must bounce once before being struck back.

2. Play continues until a fault is committed (striking in forbidden zone, sending ball off-court, and so on). The serving team is the one that scores, and continues providing the serves until all players have lost the right to serve due to faults, at which point the opposing team begins to serve and score.

3. Casual games are played until 11 points, win by 2. Professional games tend to go all the way to 15 points, also win by 2.

Want to rest in-between matches? Check out this range of patio and deck furniture by Abba patio reviewed by us!

While their design may seem fairly simple, there are still a few things worth keeping in mind when shopping around—especially if you’re thinking of going pro some day:

Material: USA Pickleball’s 2021 Equipment Standards Manual specifies that the ball should be “made of a durable material molded with a smooth surface and free of texturing”. It should be a single color, except for identification markings, and it can have a slight seam as long as it doesn’t affect flight. Since there is no specific list of approved materials, the main consideration will be how well built the balls are, i.e. how long they last and how they withstand the hits from the paddle.

Surface pattern: Per official rules, a pickleball should feature ” a minimum of 26 to a maximum of 40 circular holes, with spacing of the holes and overall design of the ball conforming to flight characteristics”. Any ball whose surface falls within this 26-40 hole range is permitted for play both indoors and outdoors; however, the rulebook does indicate that balls for indoors play tend to have less holes than those typically used for outdoors matches, presumably due to flight difference; for the purpose of this review, we will be focusing on 40-hole balls that are optimal for playing outside.

Bounce: The Equipment Standards Manual lays out in detail a test for optimal bounce of a ball, which not all manufacturers might adhere to; those who do should be preferred for shopping, whenever possible.

The options we detail below are all optimized for outdoor play— that is, with higher hole count on the surface.

In a notable departure from common practice, this ball is made intentionally heavier, which the manufacturer explains as necessary in order to give it a straighter trajectory by way of proprietary True Flight technology, which also incorporates emphasized precision in how the 40 holes on the surface are drilled and laid out. Bouncing is another factor that receives attention, as the ball is specifically design to maintain shape after several shots. To help with durability, the two halves of the ball are first heated and then immediately welded together, which is intended to create a bond that will withstand multiple impacts without giving out.

As both weight and diameter of these balls fall squarely within the range outlined by USAPA in its 2021 Equipment Standards Manual, this set is more appropriate for those who wish to train and play on a professional level, even if the company itself is not on the list of official providers. Available in both indoor (26-hole) and outdoor (40-hole) version, the latter comes in yellow color with a neon glow intended to help with visibility. The ball itself is built in proprietary co-polymer resin, designed to boost longevity and help ensure durability after multiple strikes. Available in packs with 3 or 4 pieces.

If you or someone you know like to be as close to regulation as possible, then this might be a good fit, as not only do these balls adhere to official standards—they come from a manufacturer that is included in the USAPA’s Business Directory.

There is one particular deviation from common practice which, of course, does not detract in any way from serious play: aside from the fairly traditional yellow, these balls are offered in pink; among the perks gained, customers who have bought this color mention improved visibility in the day, a distinct personal touch (such as for cancer survivors, or fans of the color)… and reduced losses, as most players are more used to the traditional yellow are are thus disinclined to filch hot-pink balls.

These ones are made in polypropylene, and are designed to last for up to 2,000 hits. They are also built to comply with official standards, with a weight of 25g and diameter of 7.4cm; it does, in fact, have a hardness (40d) that complies with the official requirement, although said requirement is currently recorded in the 2021 manual ‘for corollary data only’ and adherence to it is no longer necessary.

The manufacturer promises a bounce of 32″, which also falls within USAPA range; although there is no mention of whether said bounce was tested according to official testing parameters, several customer reports have given it positive mentions.

It doesn’t get much more official than this, as not only does this set comply with USAPA regulations—it is made by the very same company that pioneered the game. As should go without saying, this provider is included in the organization’s business list.

Due to its origins, the Dura Fast is considered the official ball for tournaments, and it is enthusiastically sought after both by those who play professionally and those who aspire to do so at some point in the future. Their unique manufacturing process yields balls without seam, which is intended to remove a glaring weakness that afflicts many competing items in the market.

Many of us are familiar with this brand, even if we became acquainted with it through a sport other than pickleball; as such, its commitment to quality is well known, to the point that it is part of the USAPA’s official provider list.

Per customer reports, its performance is so adequate that it is considered by many to be a good fit for those who are just entering the field, and the more serious players that intend to go into a tournament. Beyond its generally praised performance, it’s hard to ignore other perks such as its overall affordable cost, and the fairly unique pink option it offers.

The one caveat we could offer: it might be best to buy it in low count, so as to reduce the likelihood of getting defective units.